Attack of the Giant Insects! The Farmhouse Gallery 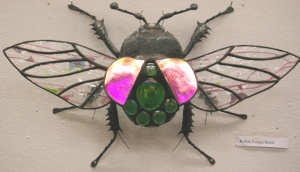 Anyone who is fascinated with insects will find Sean Goddard’s sculptures amazingly beautiful.  His larger than life insects are made with solder, stained glass and copper, yet appear flesh and blood, ready to take flight.  Sean works intently to make the “bugs” anatomically correct, adjusting the scale of wings, eyes and other features when he reproduces the creatures on a scale that might be found in a B movie horror flick.  He is careful to construct the wings of the insects with realistic vein patterns—no small feat, requiring construction from many, individual pieces of glass. 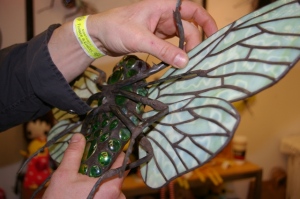 In these large sculptures, the novelty of insect anatomy can be truly appreciated—the creativity and diversity of nature resonates. The fine body hairs, sharp leg barbs and chain-like antennae are a marvel to behold; as are the lovely iridescent colors of his beetles, made with shimmery, dichroic glass that he molds in a kiln.

Sean started messing with three dimensional stained glass with a friend more than ten years ago–building artistic lighting and terrariums.  Then he branched out into his sculpture, where he showcases the unique beauty of beetles, praying mantis, moths, dragonflies and even the less appreciated housefly and mosquito.  Some of his sculptures are smaller and simplified and fit in the palm of a hand—spiders and bees. 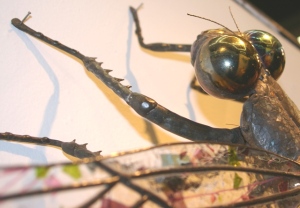 Others have a wing span of several feet—dragonflies and moths, constructed to be mounted on the wall.  Sean has visions of one day completing a gallery installation on a massive scale where the incredibly intricate wing veinage of a dragonfly, for instance, could be faithfully reproduced.

Sean with an enormous Mayfly in the background

Sean is self-taught in stained glass and entomology and peruses field guides for new inspiration.  He takes poetic license with regard to some colors, and admits that his beetles, constructed with their elytra (hard wing covers) lifted so that their membranous wings are unfurled, are estimated, since photographs of beetles in this pose are difficult to find.  After building insect sculptures for 10 years, his studio also houses a decent collection of entomology books.  Each year he tries to expand his sculptures into a new type of insect—walking stick, mayfly, cicada.

I met Sean at the Northwest Flower & Garden Show in Seattle, where he exhibits and sells his insects.  He works for several months to amass the selection of sculpture he brings to Seattle—a show he’s been attending for more than eight years now.  Sean’s main sales location is the fabulous Salt Spring Island Farmer’s Market—where some of Vancouver Island’s best artist’s sell their 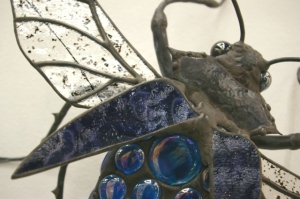 wares.  I visited him there and bought several of his bat sculptures—the rare diversion from the insect theme.  Sean’s studio at the Farmhouse Galley on Salt Spring Island, B.C. is also open to the public with regular summer hours of 11-4 and with varying hours at other times of the year—call ahead.